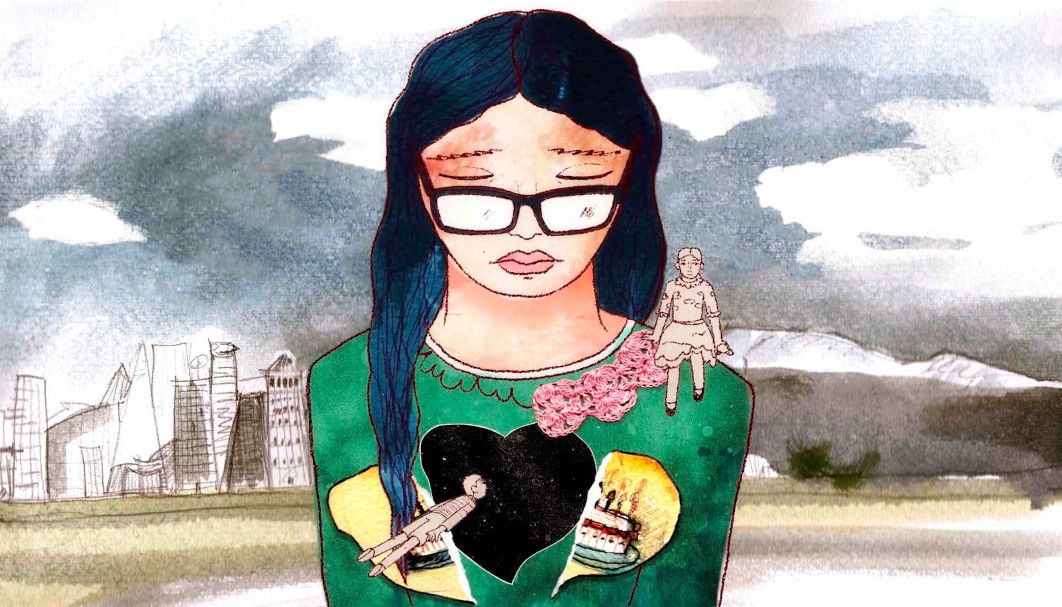 Home is Somewhere Else

The Story of Three Families: Home is Somewhere Else engages in the pain and hardships undocumented immigrants face in America. It covers the lives of three families who have endured the struggles that come from being “illegal”, in fear of being forced to live somewhere they don’t know as “home”.

Chapter 1-Jasmine’s Pursuit of Happiness: A young girl fights for congress to pass DACA, making a speech in DC about the struggles her undocumented parents face. An 11 year old girl is separated from her father for months, as they wait for him to be released from the detainment center he was being held in. An 11 year old girl is forced to grow up too quickly when she sees her father in an orange jumpsuit, as she cares for her mother who falls into a deep depression. An 11 year old girl, the only US citizen of her family, is afraid of their separation. This family is living a life of restriction, forced to hide behind the walls built within this country.

“As an American citizen, I have a constitutional right to the pursuit of happiness.” I hope one day these words fulfill the promise they give.

Chapter 2- A Tale of Two Sisters: Evelyn and Elizabeth live on different sides of the US Mexico border. This chapter holds an irony, in which the ability to choose gives one the freedom to be in Mexico, and the inability to choose keeps one in the United States. In this family, Evelyn is the only US citizen. With this freedom, she is able to move between borders with ease, but prefers to live in Mexico with her grandmother, where she lived from 1 and a half years old until she was 11.

When she moved with her family to Los Angeles, Evelyn found herself longing to go back to Mexico. “No soy Americana, soy de Mexico,” she would say, explaining that her identity was more connected to her childhood country. For her sister, Elizabeth, her adjustment to the US was much easier. She found home in Los Angeles which fostered her dreams of opening her own restaurant. But Elizabeth is limited by her immigration status, and lives in fear of being sent back somewhere she no longer calls home.

The one that can be in America legally wants to be in Mexico, and the one who wants to be in America doesn’t have the papers to be there. While Evelyn has the liberty, she also is weighed down with a great burden of responsibility to help her family back in the US, since she is the only US citizen.

Chapter 3- The Deportee: Jose Eduardo Aguilar, or Lalo, was 16 when his father was deported to Mexico. Lalo found purpose in immigration activism at Salt Lake City Community College, where he recruited people to join protests and movements. He helped lead a movement to eradicate HB 497, an anti-immigration law that allowed police officers to pull over anyone at any time and ask them about their immigration status. One day after work, he was pulled over by police officers, who questioned him about the anti HB 497 pin he was wearing, and he explained that it allowed “racial profiling and prejudice” towards minorities. The officers falsely arrested and he was deported. He shares the story of his months in the detention center, his court hearing, and his ultimate deportation back to Mexico.

Lalo started calling himself “the deportee”, as he explains that the word deported is very often stigmatized. He found solace in spoken word poetry, where he uses this tool to give a voice to the struggles people face, just like he does in this film.

Chapter X- My Family: As a first generation American, Home is Somewhere Else struck close to me. Mi tios, tías y mi abuelita first came to this Country sin papeles. Ask any of them and they will say, “Soy Guatemalteco primero. Soy Guatemalteco siempre.” When my grandfather was dying in Guatemala, they risked crossing the border to be at his bedside, in fear of both losing him, and the journey back to the safe haven they had created in America. We should not have to choose between our safety and our loved ones. I am so thankful for the sponsor who helped them get their papers. I stand with the people who still carry this weight… in their backpacks on the way to school, in their babies they are cradling, in the hands of their labor and sacrifice.

“So on these lands of crimmigration, where papers are above people, just seek the human emotions, and realize we aren’t at all, that unequal.”